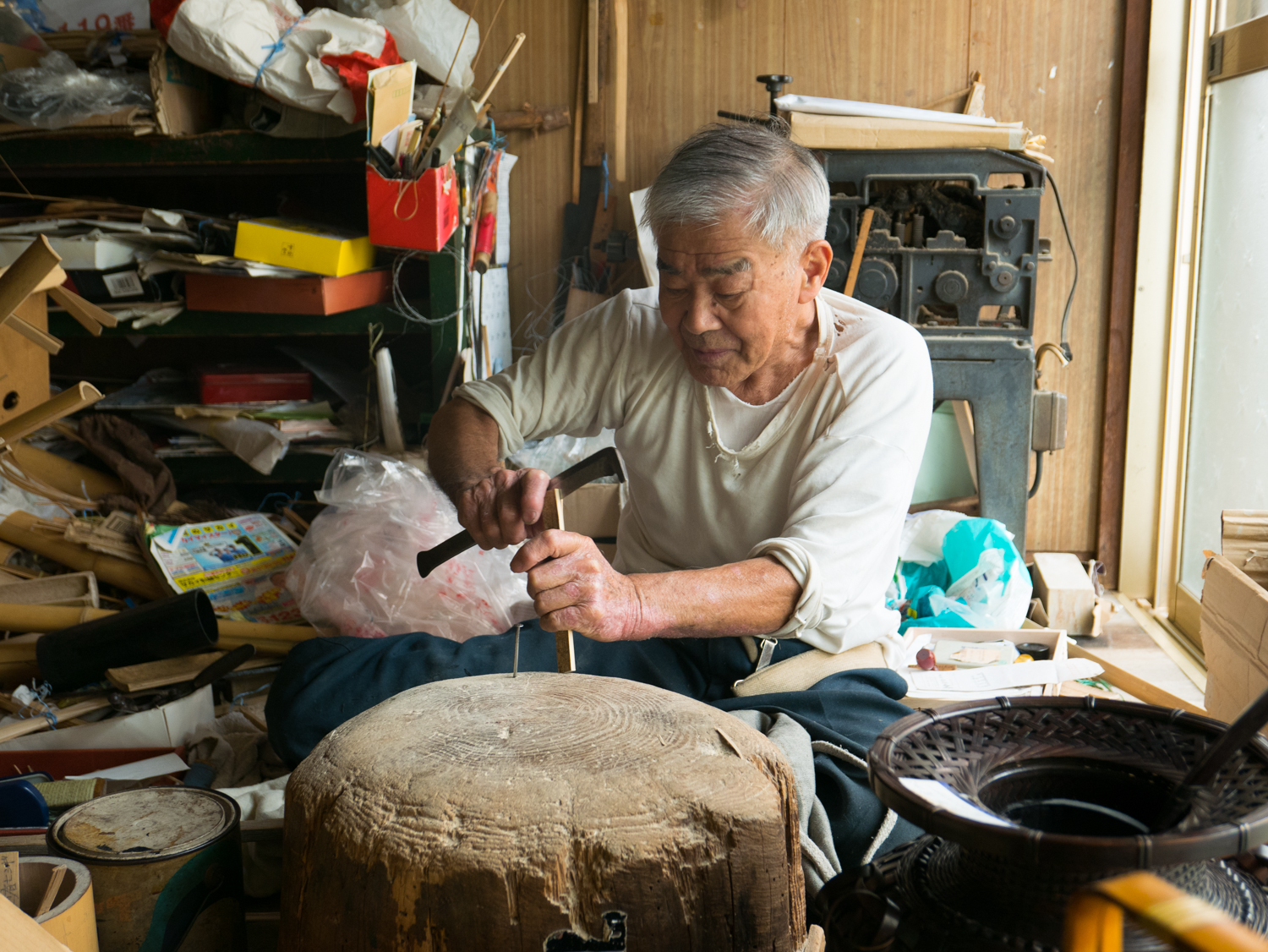 As soon as I left Kagoshima city, I was greeted by the sight of rolling hills that seemed to continue on and on. They were covered by dark trees and small villages with narrow strips of farmland dotted the areas in between. It was silent other than the occasional sound of bamboo trees swaying in the wind. It felt like the scenery has remained unchanged for a century.

The first time I visited Minoru Tanaka’s store in Hiwakicho Ichihino, Satsumasendai, was in summer. It was bigger than I expected and looked like a place that sold metal pieces and DIY items. There was nobody inside and the lights were not turned on, but I could see some bamboo sieves and baskets scattered here and there on the other side of the glass panel, which piqued my interest further.

“I have a bad leg so I cannot come down,” I heard a small voice call out. Apparently, he had caught a cold and was not feeling well. He added that he was struggling with the heat as well. When I told him that I came from Tokyo, he replied that he used to join exhibitions for local products in department stores in Tokyo and Osaka, but he could not sell his bamboo pieces there and people were only interested in food products.

He began telling me stories and I would reply him every now and then as I wandered around his store. Most of them were sieves, winnowing baskets, baskets, fish traps and other tools. I was impressed to see that even the sieves that were only big enough for beans had evenly spaced holes. All in all, I could tell that his handiwork was beautiful and meticulous. I also spotted slightly more regular items such as two- and three-tiered bamboo boxes for day-to-day use, as well as delicate and beautiful items that reveal the exceptional skills of a contemporary master craftsman such as vases, tea sets, and handbags.

He asked me which one and I lifted it up to show him. He looked it over and said that I could have it for 1,000 yen. I thought he would give it to me for free because it was left in a cardboard box with some old items. Overall, it was extremely dirty and a thick layer of dust had accumulated inside. However, this master craftsman priced the bucket at 1,000 yen and that made me happy for some reason.

The next time I visited Tanaka was in autumn. He seemed to be in poor health when I saw him three months ago, so I thought he would not be taking any more jobs, but he had been working since morning. Seeing his thick upper arm and tough hands and fingers caught me by surprise. He was born in Hioki city, Kagoshima Prefecture, in 1930. He worked on a transport ship but lost his left leg in an accident. After his rehabilitation, he came back to Kagoshima and studied bamboo work for nine months in a vocational school. He found work for a period of time after he graduated, but he did not study under anybody and learned about weaving techniques by himself even as he struggled financially.

When he visited Tokyo and Osaka and demonstrated his skills while selling his wares, he would go around and visit other bamboo craftsmen whenever he has free time. He had no camera so he would observe them and go through it in his mind so as not to forget when he slept at night. He would then work on the techniques he saw when he returned to Kagoshima in order to master them.

There was a particular basket that I liked. It was placed randomly in a corner. It was a simple waste basket that looked familiar and Tanaka told me that it was for storing magazines. It was a slightly tapered hexagonal prism with a beautiful form and woven symmetrically using Urticales. The bamboo has a clear lacquer finish and a wonderful texture.

“That was extremely difficult (to make). Nobody can weave like that anymore these days,” he said. I visited him for the third time at the start of the year and asked him to make a bamboo box. I told him I did not want ajiro weaving but traditional weaving such as the one used to make Kagoshima bamboo multi-tiered boxes. I asked for bamboo strips that are not too thin and have sufficient strength. He confirmed the dimensions with me repeatedly before deciding to create a sample for us.

He finished it in spring, but I was only able to go down to Kagoshima again in June. I found out that he had created many different samples. They were beautiful, but they were either not what I had intended or somewhat lacking in functionality. I realized that it was due to my lack of knowledge in this field and our miscommunication, but I explained our requirements again without reserve. He was neither annoyed nor troubled by it, and worked together with us to create another sample. I also remembered talking to him candidly like friends about practical issues such as how we will not be able to sell the box at the price he was quoting.

Mr. Tanaka may be a contemporary master craftsman and a recipient of the Medal with Yellow Ribbon, but he is a humble and big-hearted man. By Kimamori Tachizawa

Born in Kagoshima Prefecture in 1930. A master weaver who weaves thin strips of bamboo by hand in Hiwakicho Ichihino, Satsumasendai, Kagoshima Prefecture. Recipient of the Prefectural Governor Award, Award for Outstandingly Skilled Workers (Contemporary Master Craftsman) from the Ministry of Health, Labour and Welfare, and the Medal with Yellow Ribbon.