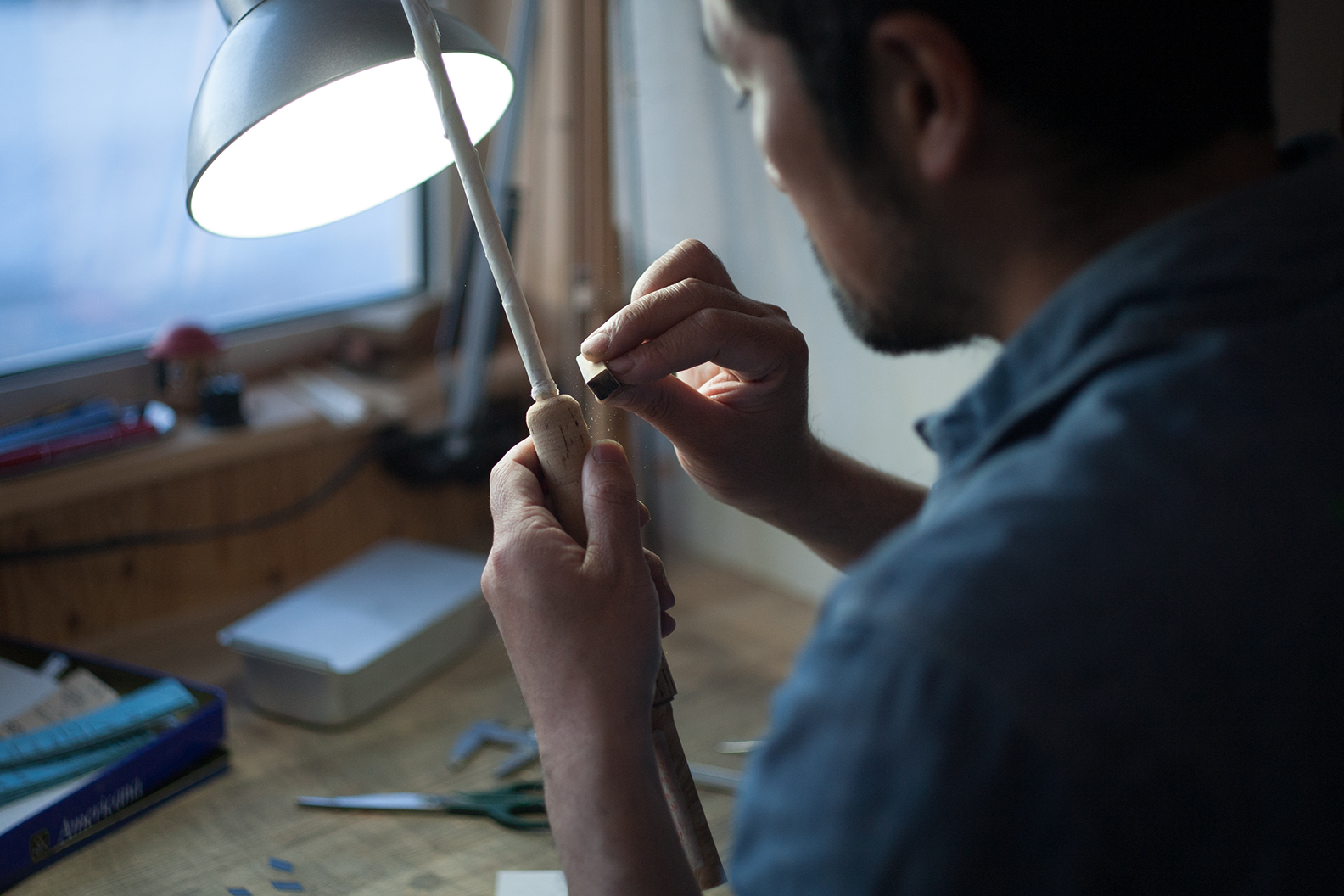 I visited Yuta Mochizuki in Furano at the end of March. Perhaps it was due to environmental change, but I was surprised to find warm weather as if it was the beginning of summer in May. I found out that it was the highest temperature on record in the last 120 years. The snow covering the flat plains and large fields was melting day by day. The sun in the north certainly shines brighter than in big cities when they do appear.

Far beyond the straight line of silver birch trees, I could see the majestic Tokachi mountain range. A thick layer of snow still covered the top of the trees. Everything seemed quiet, but I could see smoke rising from Mt. Tokachi. In the Ansei, Meiji and Taisho era, many lives were lost when the volcanic mountain erupted. It erupted again in 1962, the year I was born, and claimed human lives as well. The view in front of me reminded me that snow, water and volcanoes are all alive and flow strong and steady around us.

Yuta is a craftsman who makes bamboo rod for fly fishing. He moved to Hokkaido, which has a good supply of fish, to create bamboo rods. He believed that to make a bamboo rod for catching large rainbow trout, he had to become their neighbors first. In his second year, he found and renovated a building in Furano, which provided an incredible view of the Tokachi mountain range. The mountain range is like the nose of Biei and Kami-Furano, protruding high into the sky. After seeing the view of that gigantic mountain, I felt as if I would never feel complete in a place without it, like a beautiful scenery without flowers.

Yuta got up while it was still dark outside and went into his studio. The slight sound woke me. I checked my watch and saw that it was 4:00 a.m. Dawn is approaching, but instead of a white glow, the sky was tinged red and the top of the mountain range stood pitch black in the dark. Yuta did not look up even once to see the breaking dawn and continued carving a bamboo using a billhook without pausing as the sun slowly rose. Wrapped in solitude, the solemn order of nature could be felt there, at least until his family woke up. By Kimamori Tachizawa

Born in Yamanashi Prefecture in 1976, he worked for an outdoor manufacturer before moving to Furano in Hokkaido, which is surrounded by nature, in order to concentrate on making bamboo rods for fly fishing. Using his vast knowledge on bamboo materials and the skills he developed from making bamboo rods, he carved the bamboo knives by hand one piece at a time.