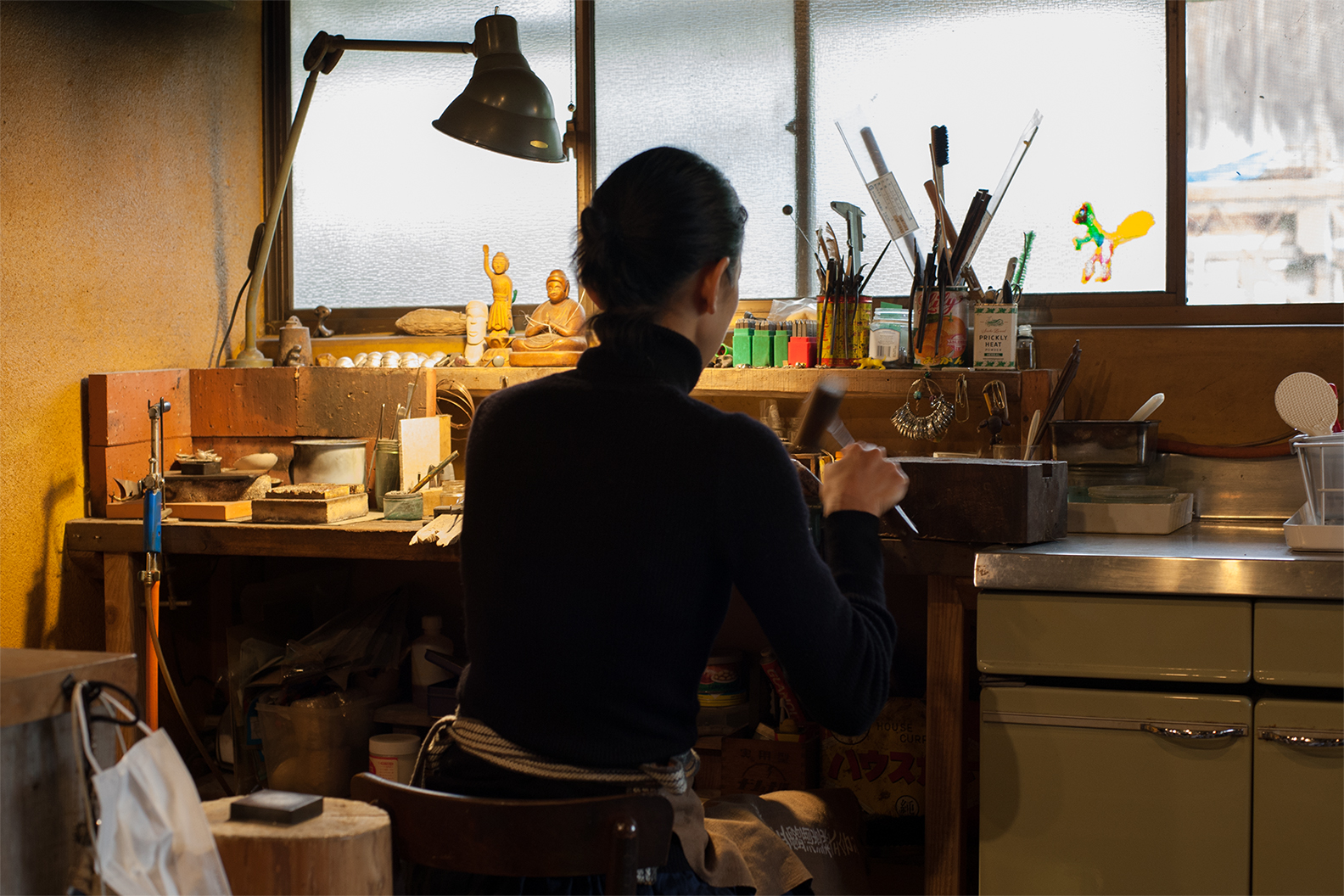 The touch of a hand

It took me a while to get used to the dim room. It was quiet inside and even the sound from outside felt like it came from far away. This 100-year-old traditional house is clearly a unique space. Kumiko Isogawa’s studio is tucked next to the kitchen of the large house, as if it is a secret room, and it is in this tiny, modest workplace that she makes her tiny bells.

In every house, the kitchen is undoubtedly essential in nurturing and keeping the family together. It was the domain of mothers and wives, even if the space merely consisted of a dirt floor that was separate from the main building, the way it often was for old Japanese houses in the dark and cold northeastern region of the country. Her studio may be modest, but it has an imposing presence as it stood serenely next to the kitchen.

I will not write about the process of making bells here; instead, I will talk about something that left an impression on me. To make 15 bells, Kumiko first cuts 30 round shapes out of a silver plate, creates a hammered pattern in the round discs, and turns them into semi-spherical shapes. She makes the hammered pattern first because that helps it to age beautifully and creates interesting, complex texture. Once she has completed 15 pieces each for the top half and bottom half—all of which have different shapes—she looks through them and pairs them up. The pairing is decided not by design, but by instinct in a vague manner. She then heats the balls on a burner. She would hammer them and then roll them around in her hand, repeating the process over and over again.

We asked her to make bells in the shape of the “Six Permissions” painting done by Muqi Fachang and she created charming bells made out of ordinary wood and mallet with just her hands. The process sounds natural when I write it down now, but I had thought that it would be more logical and machinelike, so I was surprised to see her working by instinct with her hands.

When I caught a fever as a child, my mother would touch my forehead with her hand and rub my back when I coughed. I also remember how the rice balls and Japanese sweets that she rolled by hand ended up with the same shape. We have a tendency to trust our own hands more than thermometers and molds. This is a human behavior and our sense of touch is our most advanced skill.

Kumiko told me that she had not mastered the process of bell-making, so she would constantly check the bells and carefully work on each step. From that, I gleaned that she is someone who wants to dedicate herself to her work. The 1,000 bells we ordered from her may be the product of Umisenyamasenkai, but they will be imbued with her devotion to her craft. Kumiko has delicate hands and thin fingers, but I see only strength and resilience without any trace of ambiguity.

One second she is touching the bells gently as she looks them over and the next she is hammering them firmly into shape, her hands moving like a rock-and-roll musician. I found the two opposites captivating. By Kimamori Tachizawa

Born in Aichi Prefecture in 1974, she studied metal carving at the Hiko Mizuno College of Jewelry.
She moved to Ishigaki in Okinawa Prefecture after giving birth to her son, where she began making bells while experiencing island life. She then moved with her husband and two sons to Sasayama in Hyogo Prefecture, where she is currently based.